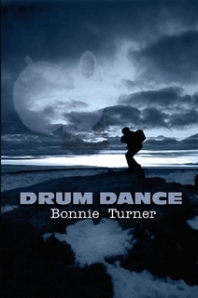 Review: “Drum Dance” begins with a believable premise many people might identify with: the attempt to get know a parent again after being separated for some time. As young David is flown to the icy trading post which his father manages, the battle through the elements was particularly outstanding. Not trying to stereotype all seventeen year olds, but I found some of the thought processes, reasoning and observations suggesting experiences were somewhat beyond the main character’s years, and more representative of a matured man in his thirties. I realize, however, this is taking into consideration the time period as well as David’s expressed Christian upbringing.  Perhaps this was an unspoken element dating the setting, for many young people then had responsibilities beyond some of the social media, fashion and/or entertainment obsessed adolescents of today, so very self-centred in concerns.

Some things which worked against the pacing for me was the fact it is a dialogue heavy manuscript where the speaker isn’t always clearly confined, which I sometimes found confusing. Changes in sentence and paragraph structure might have helped this. I felt providing scene details and background information would have been better served in smaller portions at a time, or at set times within a scene which didn’t isolate sentences of a conversation.  Such as in the scene when David meets his father again after long years of separation, during a rather emotional exchange, we’re panned off to a couple of paragraphs describing the room before it picks up again. There are some editing issues, especially towards the end but I would attribute this to the fact I was supplied with a final manuscript in .doc form and not the finished .pdf version.

It’s an engaging tale, rather a “coming of age” of sorts, and it’s a nice step outside the bounds of truly contemporary works though it’s not quite historical fiction. It’s set in the late nineteen thirties, yet except for a few references to the Great Depression and the beginning of World War 2, it could have been any time period, for the way of life in the snow and ice of the great Canadian north is in many ways unchanged in basic needs, daily life and activities. Plotting was good, and the author’s knowledge of the Canadian Artic and this particular indigenous tribe was apparent, which is a huge plus in “Drum Dance’s” favour. The supporting characters, mostly in the form of natives, were “real” for me, and the main character David, likeable. Although I had a lingering wish for more narratives and less “spoken” words to provide a greater depth and inspiration for empathy, I was satisfied with the story as a whole, and found the work one to admire.

Personal Note: As a Native American, I particularly respected the author’s not presenting native customs and life in a derogatory manner simply because it is different than Euro-Christian beliefs.

Seventeen-year-old David Jansson moves to an isolated fur-trading post at Gjoa Haven to live with his estranged father, Per Jansson, manager for the Hudson’s Bay Company. Expecting a loving reunion when he arrives on the harsh, sunless island in late February, David instead finds an alcoholic father with a flash temper. David’s struggle to stay sane amid conflict over a half-blood Inuit girl, a shaman who sees the youth’s potential for shamanism, plus David’s chilling psychic abilities, lead him to risk his life by underestimating the weather … and his own heart … in the same area where Sir John Franklin and his crew froze to death searching for the Northwest Passage.