Digging Deep: A Writer Uncovers His Marriages by Boyd Lemon, A Review and Literary Observation 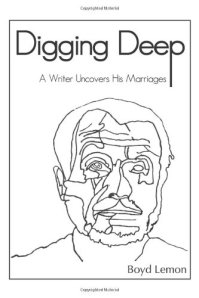 Review: “Digging Deep” by Boyd Lemon is plain in delivery with flourishes of creative phrase that are interesting yet never mask truth from the author’s perspective. There was much hard won wisdom throughout the narrative that could apply across cultures, but I did find some of it more especially related to what I think of as new American and of European descent. So for some, me included, the general life and story wasn’t applicable per se.

There were parts I could understand and empathize with such as not wanting to be different, even though in my case I am literally different, while other choices and behaviors were completely alien and though I’ve comprehended and observed such, it wouldn’t occur to me to do so at any time. I think that’s the nature of memoirs, however, and why some appeal to peers and then others have no interest in ones too different from their own lives or realms of experience. Adult language, situations and explicit descriptions are a part of the whole that are indicative of an adult’s life, so that should be no surprise for mature readers. I believe this memoir would have great appeal to select groups but should be admired by all for its intention.

Observations: I believe most writers have a courage non-writers don’t necessarily understand. Certainly, they may acknowledge the creative process, but the fact is, whether fiction or non-fiction, for many, being published means putting your heart and soul out there for others to judge. This is one reason I review as I do. Not excusing rude reactions, for some is not a matter of being “thin-skinned” or “overly-sensitive” when someone harshly judges their work in a disparaging or unnecessarily nasty way, especially if it is another writer. It is not a learning process to receive such, besides which, in my opinion, it is as if that writer has forgotten what writing really is and means. Not liking something is fine, saying why is fine, insulting or disrespecting the person themselves is unacceptable to me.

Then there is a special class of writers, memoirists, of the factual kind (not the heavily embellished or really not quite true kind we’ve seen in some news revelations). You are laying bare your soul in an entirely different way, for whatever reason you choose to do so, however you choose to do so. It’s not for entertainment purposes. It is not to titillate the reader, unless it is that sort of book. I think it is crucially important to respect the subject matter and tone. Some people question what’s the point, what do they gain from reading a memoir if it isn’t a celebrity or historical figure. Even the memoirist might ask that sometimes, and certainly the literary agents who reject the vast majority of everything do so, and I don’t think it’s a matter of their having delusions of grandeur that causes them to record some of their most personal experiences and thoughts.

Description: Lemon moves from a lifetime in California to live platonically with a 24-year-old female college student. He takes us with him on his journey to uncover his role in the destruction of his three marriages.

With brutal honesty, courage and insight he uncovers and exposes his conduct and attitudes about women and marriage that had been profoundly influenced by his place on the cusp between the moralistic generation of the 1940’s and the next generation that embraced sex, drugs and rock ‘n roll and greater independence and equality for women.

Deeply troubled by his career choice as a corporate lawyer, he nevertheless, used it for years to avoid his marital issues. Lemon’s story will guide you in resolving your own relationship problems.

“I lived most of my life in Southern California. Moved to Boston in March 2007, where I stayed until spring of 2010. I loved it — great city. I write short stories and have finished a memoir about my three marriages. It will be published in 2011.

I love that so many of my life dreams have come true: Lived in a home with a stunning 180 degree view of the California coast, Traveled to Africa, Australia, Peru, Brazil, Argentina, Mexico, Italy, Spain, Germany, Austria, France, Ireland, Costa Rica….