Write a review of your own work? The Self-Critique

Here’s my review of “Katrdeshtr’s Redemption”, The Night Cat, Book One, written by me. 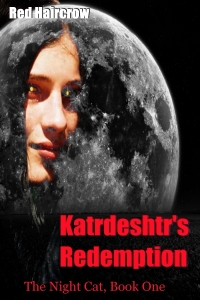 Review: “While the story isn’t in itself unique, as the market is currently flooded with a preponderance of vampire fiction of all kinds, the character Katrdeshtr was compelling and quickly engaged my interest. His mercurial personality shown through, and the author succeeded in highlighting his special combination of innocent beauty and old evil. We are given a poignant though brief glimpse into his past as a human which I wish had been more expansive, but perhaps it will be expounded upon in other volumes.

At times I found the prose overly descriptive which slowed the flow of the swiftly moving tale but it did become more streamlined at it moved towards the climax. Secondary characters like Tal Trieska, Kat’s long time lover and fellow vampire, and Marek the Polish Prince, his ardent though rejected follower, were strong yet didn’t steal Katrdeshtr’s central role. Since it is to be a series, I could see where they could be incorporated again or even have their own book or two.

The ending was a dark surprise which left me wondering, and definitely interested in the next installment in The Night Cat series. As difficult as the title is, there was no problem understanding and enjoying the dark vividness of this short story. “Katrdeshtr’s Redemption”, though not a classical vampire tale which abides by the traditional rules and guidelines for the undead creatures, would satisfy the casual lover of the genre or anyone with an open mind searching for a quick read.”
Rated Mature for an introductory sexual scene with overtones of violence.

My point of this exercise is to show that most writers are cognizant of the flaws or faults in their stories, or aspects which might have been written another way.

So in keeping with my support of making appropriate replies to  reviews of any kind without being censured by peers or others, this is an example of how flaws can be noted while still being professional in tone.

Filed under Reviews, Writers and Writing