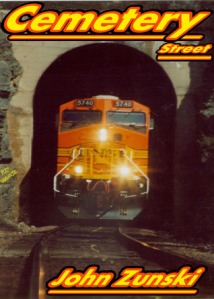 Review: With a variety of situations that happen in all levels of the society you live in, no matter where you are in the world: angst, pain, love, death, Cemetary Street is set in what I would consider Anytown, US, but what I understood to be emotionally engaging to some, didn’t grab me. I could certainly feel the power of the author’s vision in this “slice of someone’s life” tale and what they wished to present, yet the “all-American” theme especially when including military life has never been one I identified with or care for. Characters were vividly drawn and detailed, no doubting that, and the story moved forward with good pace, and obviously a clear plan, I felt Cemetary Street was a great debut effort, but just wasn’t my type of read.

Description: “In a world of presumptuous people, irony is alive and well,” concludes James Morrison, the narrator of this touching coming of age novel. A view Shannie Ortolan – James’s longtime friend, sometimes lover, and full-time obsession – wouldn’t argue. From their first encounter as teenagers until Shannie’s death, experience the twists, turns and enthralling characters that populate Cemetery Street.

On the cusp of the new millennium, James fulfills a promise. Reenacting a childhood ritual, he places a mud pie upon a grave. This simple act triggers powerful memories. Meet the people that shaped James’s life. Shannie, who among other things, introduces him to the sport of dodging freight trains. Count, the cemetery caretaker’s son, helps James navigate the minefields of adolescence until destiny is met in Desert Storm. Russell, an aging blind African-American, guards a horrifying secret behind a cloud of cigar smoke. Diane, Shannie’s mother, a college professor dispels the notion of tweed jackets and elbow patches. Steve Lucas, a mortician’s son, who despite bizarre obsessions, stands by James during his most challenging times.

John was born and raised in suburban Philadelphia. In 2003, he sailed across the country in a U-haul and settled in the Bitterroot Mountains of Montana. He is the Author of four novels. Cemetery Street is his first. His second, Shangri-la Trailer Park will be published in the fall of 2011. Dirty Bum for President – the story of a unique candidate and Nightwatching – a ghost story, will be published in 2012. He is currently working on Cemetery Street’s sequel, Montana Rural.

One response to “Cemetary Street by John Zunski”