The Other Side of Life by Jess C. Scott 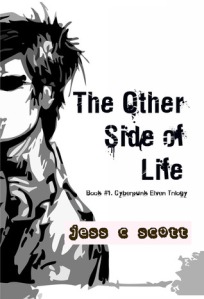 Review: A mix of fantasy and science fiction (using “old” terms), The Other Side of Life is in “new” sub-genres as well: cyperpunk and urban fantasy, both types which are sweeping through fiction like wildfire these days.

My editor’s eyes definitely had a problem with the point of view switching back and forth between characters from sentence to sentence within a scene, sometimes leaving me not knowing who is experiencing what, and especially who was thinking certain thoughts. I found this unnecessary, because even if you’re using two POV’s in one scene, the writing and paragraph structures should keep it clean and separate enough. It’s possible to do so, but it takes objectivity, removing what is not absolutely necessary at a certain point, and incorporating the information later. Transitions instead of telling is also something which could have been utilized more, itself of being told fact after fact, movement after movement as at times, this came off as rather disjointed to me.

I thought the ideas were interesting and novel, although it was a theme explored before, Bioware enhancements and the like. It kept me reading to gain more insight into what it could mean for both human and Elven. I know it’s also described as having a romantic element to it, and the author made us aware of the attraction the Nin and Anya felt, but they weren’t very compelling to me, especially Anya, as the world overpowered them with its vividness. I felt it was a great idea, yet a little uneven in execution. In the end “The Other Side of Life” would be appealing to a wider audience than just those seeking cyberpunk fantasy. It’s a nice read.

Jess identifies herself as an author/artist/non-conformist. Her literary work has appeared in a diverse range of publications, such as Word Riot, ITCH Magazine, and The Battered Suitcase. She was a research assistant to the 2010 Jossey-Bass/Wiley publication, My Lie.