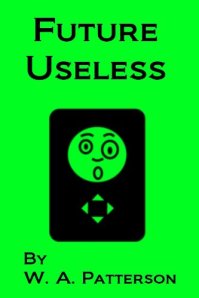 Review: In some ways reminiscent of Larry Niven’s “A World Out of Time”, W.A. Patterson’s “Future Useless” is the story of a man from the mid 1990’s reawakened in the distant future. It was interesting to read his perspectives as he learned of the “world” again, how it had expanded outside Earth’s atmosphere to the Moon and beyond. I questioned the reason of having a prologue of so long a length, which was several pages. I thought the information provided could have been condensed into perhaps one or two giving the reader only what was necessary to set the mood for the story since part of it is given in the synopsis anyway.

It’s written in first person, so that’s one of those modes which can be chancy and likes and dislikes subject to the reader’s tastes. By nature, the author will be telling the reader what is happening from the main character’s perspective. I felt this worked both for and against the story. It was perfect for showing me the wonder of Carl’s thoughts at the vastly interesting “new” technology, but after a while, and at critical times, I found myself wishing someone else’s view.

I enjoyed the plot, and I loved the fact that although the story was profound, it lacked pretentiousness. The author knew they had a great story and they let it evolve without unnecessary embellishments. Congratulations, W.A., this was great work, definitely worthy of a re-read.

Note: The only thing I might change really are the file’s end remarks by the author. Self-published writers continue to get a bad rap from some readers and review groups, often unwarranted. Mentioning the possibilities of errors, etc. could be counterproductive as well as the surprise that someone actually finished.

Description: Hospital Janitor Carl Gussman died in 1997 and chose to freeze himself to be revived later when science could accomplish that task. The problem is that Carl lay forgotten and unwanted. In 2976 Carl was thawed out, but found freezer-burn had ruined his memories. Complicated by the fact that the future didn’t need janitors anymore, and a phobia to the nanotech needed to live a normal life on Earth Carl found himself in a difficult situation.In a future where Carl found himself useless, he did what no one expected- He disappeared … until now.

W. A. Patterson is an independent writer from Kansas. He has a family and friends and a computer in which he is busy at work on his next book. Website: http://www.wapatterson.net

One response to “Future Useless by W.A. Patterson”