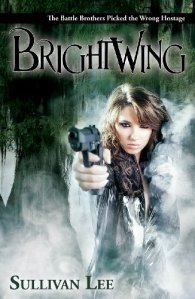 Review: Well, the first thing that jumped out at me was that the author used the term “res” to refer to a Native American reservation when the correct and widely used word is “rez”, at least by natives or those who know them anyway. If the character were really an Indian, they would have used “rez”. So as a Native American myself, that just seemed odd as well as the need to detail some ceremonies not generally offered to others, especially not ones like the Battle Brothers, but I’m getting ahead of myself.

Though some descriptions were repetitive at points, the writing style was great, in that I didn’t feel like I was actually reading most of the times: I was merely observing a story in my head. It just flowed, yet I found the characters problematic. When I don’t like the characters, and have to question over and over again why are or why aren’t they doing something that would be more believable, it can become laborious. Just the same, the characterization was detailed, and very likely designed to elicit strong reactions in readers.

The main character was a strong-minded, take action, “thinking” type of woman, admirable for that, but contrasted dramatically with the pathetic excuse for humanity brothers Edgar and Mallory Battle. I had no sympathy or regard or understanding of how she could fall for Edgar, so there were a definitely “versus” aspects of Brightwing, and I didn’t get the “love” part of it at all though there was plenty of adventure.

The author took great care in editing and gave an interesting, stylish format to their manuscript, and should really be commended and I personally know how much skill, time and determination that can take. The cover image was eyecatching, too. Overall “Brightwing” is an outstanding effort, with a unique voice and perspective that will appeal to readers wanting a different and far beyond average read. Even if I found some of the creative interpretation in the details and descriptions related to Native Americans off-putting with stereotyping, I realize others may like that “exotic” aspect of a work.

Description: Edgar and Mallory Battle are on the run after a spectacularly violent escape. Now, with a trail of bodies behind them, they need a hostage against the inevitable standoff with the police. Their first doesn’t last long, thanks to sociopathic Mallory. Edgar has been hiding his brother’s crimes since they were kids. Now he’s torn between family loyalty and self-preservation.

They carjack Lucy Brightwing, a criminal fresh from her own heist, with a fortune of uncut gems hidden in her vehicle. She could escape – but she won’t abandon her millions. She could kill the Battle brothers, but she has to be careful. For one thing, if the law investigates, they’ll find her ill-gotten loot. For another, her own life is sacred. She’s the last member of a Florida paleoindian tribe thought to be extinct – the Tequesta. With her share of the money she plans to buy, bribe and blackmail her way into her own ancestral tribal lands in the heart of the Everglades: a Tequesta nation.

Lucy leads the brothers into her beloved swamp, determined to kill them. But when she falls for Edgar she must decide whether to risk her heritage and the future of her tribe to save the doomed brothers.

Sullivan Lee is a former Florida deputy sheriff who would proba-bly arrest every character in this book. She writes children’s novels under another name. Find her on Facebook or follow her blogs, http://sullivanleewrites.blogspot.com and http://lauralsullivan.blogspot.com.