That Which Is Human by Bruce C. Davis 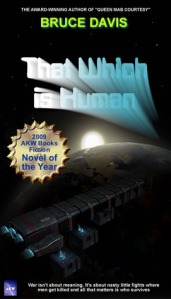 Review: There are those books out there that one wonders how they escaped more general notice, but with the e-book market as it is, maybe that’s not so hard a thing to believe. Some genres seem to get more notice than others, though as a long time fan of sci-fi and fantasy, I’m always on the search for capable authors I’ve not read before to supplement writers I always return to. Many fellow fans seem to be the same.

If you enjoy more of the sci-fi sub-genres that gravitate towards the heavily detailed and militaristic, “aliens versus humans versus humans who’d allied themselves with the aliens,” “That Which Is Human”, would certainly be a recommended read. I can appreciate the camaraderie and discipline often associated with armed forces personnel or situations, but it’s not a lifestyle or profession I believe in, admire or like, so for me, that aspect of the story I didn’t care for, and as it was central to the core of it, that was hard to deal with. Just the same, although some phrases or characters seemed a bit like cliqués at times, the writing is sound and there’s clear purpose and planning evident in the whole. Plenty of hard core action for the military sci-fi fan, deep enough emotional content and characterization that others could also be satisfied.

Description: The war with the Rilz is pushing humanity to its limits and Intruder pilot Lt. Alan ‘Mac’ McAllister and his flying partner ‘Ivan’ Ivchenko are in the thick of the fighting. Battling the Lizards is bad enough, but fighting a planet full of rebel humans tests their friendship and Mac’s integrity as a Naval pilot. But the biggest test for Mac is maintaining his own sanity in the face of a creeping dependence on the electronic link that allows him to fly the most advanced combat spacecraft ever devised. When a vicious counter attack by the Rilz places the lives of his ex-wife and her new family in harms way, he must set aside that which is still human within him in a final showdown with mankind’s most implacable enemy.

One response to “That Which Is Human by Bruce C. Davis”