The Vampire from Hell: The Beginning by Ally Thomas 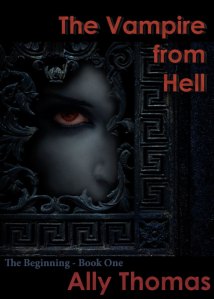 Review: “The Vampire from Hell” is a great idea, one I thought unique from my perspective. I don’t generally choose vampire fiction as a genre to read personally, but Amy Larkin’s idea drew me in though often I wanted a more detailed picture of “Hell” so I could visualize it’s denizens and their activities. More background information would have been greatly appreciated, but one supposes this will be expounded upon in the next installments.

One of the things about stories told in first person is that observations are all from the main character’s source. There were times when another character’s emotions or thoughts were given yet lacked explanation of how the main character knew them. It’s a tricky medium because you really have to balance how much you are telling or speaking in the character’s voice and then merely letting a scene unfold on its own and just describe it.  The writing style would do well to evolve into a more flowing experience for reader by doing more showing than telling.

So many vampire fiction characters are somehow all-knowing, powerful and engaged in epic struggles while still leaping from bed to bed, but this is a personal story where the character Rayea shows both defiant determination to be an individual with their own motivations and thoughts and a vulnerability that is understandable under the circumstances. The circumstances being her father is Satan and when he doesn’t like something she might have done, torture and humiliation are his methods of letting her know. There are many possibilities for this series, and I feel Amy Larkin has much enthusiasm for her stories. I look forward to how “The Vampire from Hell” progresses.

Ebook Short Description: According to Rayea, the oldest daughter of Satan, the origin of vampires started in Hell, and it started with her. Here’s her story about how it all began.

Extended Description: Rayea isn’t daddy’s little girl, even if he is the most powerful fallen angel around. He wants her to take an active role in the family business. But she’s not interested in his schemes for world domination. Instead she wants to spend her time shopping on the Internet, rescuing humans from a horrific eternity, and practicing martial arts with her seven foot hellhound. Then one day everything changes.

Parental Rating: This book contains content that may not be suitable for young readers 17 and under.

Note: The file supplied by the author shows “The Vampire from Hell” written by and copyright to Amy Larkin. As seen in the cover art image, the author’s name has been changed to Ally Thomas.  Please see the author’s clarification provided in the comments area.

“I write fantasies and paranormal romances. I like writing about vampires, werewolves, zombies, witches, and any fuzzy monsters who go bump in the night. In my stories, I try to imagine new origins for these traditional creatures and see where it takes me.

In another life, I’m rather sure I was a vampire or a cat, and yes you’ll find either or both in my stories. By chance, if you notice a tall, blonde, handsome guy show up in one of my stories and you think of Eric Northman from True Blood, then yes, I’ll admit. I’m a fan of Alexander Skarsgard, the actor who plays that character. But just keep that observation between you and me, okay?”

Where to find Ally Thomas online:

13 responses to “The Vampire from Hell: The Beginning by Ally Thomas”