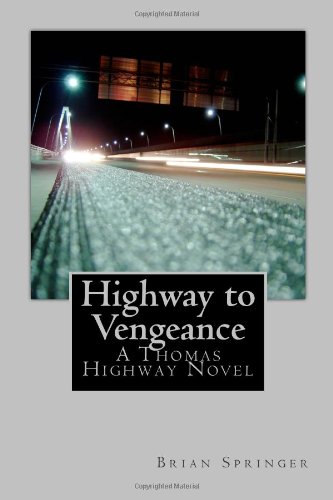 Review: Volume One of Thomas Highway Novels. Whether it’s about Navy SEAL training or what a body does as it dies, when the extra steps an author takes to make sure his facts are as accurate as possible is obvious, it’s a special thing. There’s always the other side of the coin, making sure the reader is not flooded with too much superfluous information, but I greatly appreciated the authentic voice. For me, it showed absolutely showed this author is serious about his craft, and he means business just like the main character Thomas Highway.

“Highway to Vengeance” had the phrasing and euphemisms associated with “avenge the fallen” type books, so fans of the genre might be pleased with that aspect of Springer’s tale. The main character, Thomas Highway, is presented in such a way you see the human side of him also, not only a man willing to kill those responsible, outside the boundary of law, when his wife is murdered. He remains a sympathetic figure throughout, with a quiet charisma that grows on you. One thing I would have preferred, in this dialogue heavy first person POV, was to have scenes and personalities develop more through description of behaviors than descriptions of actions. Especially at times when high tension or great suspense is presented, too many details can be distracting.

Springer kept up a steady pace of action and methodical progress as we followed Thomas Highway’s path of vengeance and created an anticipation that is unique for me: I was curious about what happens next. We know this is the first volume in a coming series, and Springer really made me want to watch Highway’s evolution. We’ve seen him struggling with his wife’s murder, seeking out and killing the bad guys (and girls), and finally in the end, getting the SOB behind it all. He’s grown as a person, he’s smarter, harder and even more seasoned. And where will he go from here? I’m sure Brian Springer will tell us. “Highway to Vengeance” has a more common theme, like many suspense thrillers, but was very successful in creating a main character people will want to get to know further.

Available at Amazon in print and Kindle ,and Smashwords.

To learn a little more about the author behind the thriller, here’s our interview, but you can always contact the author through his website listed below.

Brian Springer in his own words:

I started off writing supernatural thrillers with a heavy horror element. After I landed an agent, however, he wanted me to write crime thrillers with no supernatural elements, so I did. Three years and two books later, he was unable to land a deal with a publisher so we went our separate ways.  I self-published the crime thrillers I wrote for him but have since gone back to my first love, writing supernatural thrillers. They just offer so much more freedom and the opportunity to talk about issues that matter to me the most; life and death, belief and unbelief, mankind’s purpose (or lack of one) on this earth. It’s much easier to delve into those subjects with a broader canvas to work with. Limiting yourself to the “real” world is just so damn, well, limiting. Ideally I’d like to marry the style and setting of a crime thriller with the subject matter of a supernatural horror novel.

When did you first realize you wanted to be a writer?

It was actually in class while getting my MBA. I’d always been a serious reader, but it wasn’t until we were in the middle of a three-hour long discussion about what would make the perfect handheld device (this was way back in 1997) that I realized that I wanted no part of the business world. So I decided to write a book. My first book, a really bad political thriller modelled loosely after George Orwell’s 1984, was written during the year and a half I was getting my MBA. Mostly in class.

I’ve got a blog that I don’t write nearly often enough. It’s called the BS Book Blog. You can find me on Facebook and Twitter (brianspringer13) and my website can be found here: Brian Springer.

Who are your favorite authors and why?

Dan Simmons is my idol because of his effortless weaving of literary elements into his novels and his willingness to buck the establishment and write in multiple genres. I grew up on Stephen King and Clive Barker but have gravitated more towards crime novels in my later years; Dennis Lehane, George Pelecanos and Michael Connelly are always solid reads. And George RR Martin is the king of fantasy. Also a nod to Joe Haldeman.

What are your favorite genres to read?

I don’t read genres as much as I read authors. I’ll read crime, horror, fantasy, science fiction, straight thrillers and even some literary novels if the writing is good enough. I’m not a big believer in genres; I understand their necessity but I think they serve as artificial inhibitors. I want a good book, period.

Why do you write?

Multiple reasons: To exorcise my demons. To make sense of the world and ultimately the universe. To keep my mind occupied. To escape from the real world.

What excites you about writing?

The ability to work things out. I’ve got so many conflicting ideas rummaging around in my head, fighting for priority, that the only way I can organize them is to put them down on paper. And then to see what I’ve written and how it all works together, that’s exciting.

What kind of research do you do for your books?

Depends on the book. For Highway to Vengeance I spent a good deal of time watching documentaries and reading about SEAL training so I’d get the details right. The last group of people you want to piss off are SEALS. Straight thrillers have a lot more technical elements to research; guns, the technological capabilities of the government, layouts of safehouses and heavily fortified compounds, that sort of thing. Most of it comes from the internet but I have a few friends in the military and intelligence communities that allow me to bounce ideas off them. The supernatural thrillers are more off-the-cuff. But most of my supernatural stuff is based in mythology, so I’ve done a lot of research there. Mostly from books but also online. But for both I like to do a lot of geographical research. I like to get a feel for the location I’m working in, even if I scramble some of the specifics to fit my story. On location, if possible. Google if not.

Do you currently have any works in progress?

Yes, two different ones. Both supernatural thrillers, one about a girl with mental abilities that escapes from a government program and goes on the run to seek out someone that can help her figure out her purpose. A quest-type novel. The other one is about an eternal warrior that’s spent the last 2000 years training for a specific reason, only he doesn’t know what that reason is. Sort of an unholy mish-mash of Highlander and The Bourne Identity and The Dark Tower. Both books take place in the same “universe” and may even be part of the same cycle of stories, I haven’t decided yet. Hell, they might even end up as parts of the same book. It just depends on how it plays out.

What would you like readers to know about you the writer?

Wow, a tough one. I guess I’d like my readers to know that I’m very down-to-earth and approachable and truly want to hear from them, both the good and the not-so-good comments. I’m just a normal guy with a screwed-up head, not some psycho artist with a superiority complex and a holier-than-thou attitude. I do this because I’m compelled to, but also because I want to allow people the opportunity to catch a glimpse at a world-view that they might not ordinarily take the time to consider. Also that Brian Springer, the writer, is far different than Brian Springer, the person. All the thoughts and attitudes and philosophies in my books come from the characters themselves and not me. Please don’t confuse the characters with the writer. They are not one and the same.

A big thanks to Brian for taking the time to share more of this thoughts and writing process with readers!

Other titles by Brian Springer, Blood Money, also available through Amazon and other distributors. 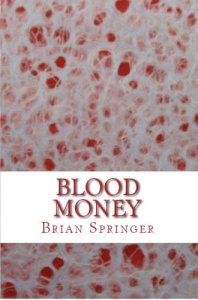 Description: “In a world of slippery justice and bankrupt morals, Greg Kelton is an anachronism; a vigilante-for-hire who would be far more at home in the Old West than modern day Southern California. Despite his proclivity for operating outside and even above the law, Kelton is a brutally honest man who only takes on jobs that are in line with his strict moral code, often to the detriment of his own pocketbook.

When Kelton is approached by an old friend with an offer to rescue a beautiful female biologist named Jessica Robbins from federal custody, he accepts without hesitation. They quickly finds themselves on the run from the government, in a race to keep Jessica’s latest discovery, a vaccine for the AIDS virus, from getting squashed.

As the chase continues through Disneyland, Death Valley and finally culminating in the tunnels under Las Vegas, Kelton finds himself growing more attached to Jessica with every passing moment, forcing him to face a past that has left him a fractured, wounded man in order to expose a conspiracy that could change the world as we know it.