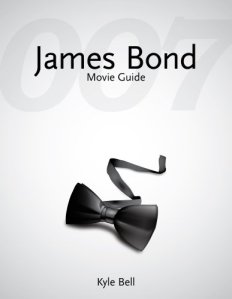 Review: “The James Bond Movie Guide” by Kyle W. Bell is a somewhat different take on the well-known film series than the average. One of its features which sets it apart from others of its kind? The detailed reviews of the 007 spawned video games for various console or game systems. A younger audience or gamers who enjoy the action genre might find this unique, but I was surprised by the length of those reviews compared to the comparative brevity of the film observations.

Each chapter was based on a film, and written rather in the form of an essay. Obviously the author was knowledgeable on the topic except for a couple of errors many fans would immediately pick up and references to pop culture of the generational spanning series which didn’t quite reflect the times, and I noticed some of the most outstanding trivia, facts and accomplishments were often left out. Quirky notes like former tennis pro Vijay Armitraj being in Octopussy, or the unforgettable presence of Grace Jones in View to a Kill, and especially the fact that the role of the new “M” finally went to woman, Dame Judy Dench in Goldeneye. These were facts fans could had found themselves nodding in agreement to, and could have helped widen appeal to a greater audience.

True Bond fans might take issue with it, but then the title of “true” is arguable. Is a Bond fan one who acknowledges the good and bad points of some of those is the film series yet still loves them anyway for what they are? Or is it one who accepts no slights against the iconic spy created by Ian Fleming? I think it’s a little of both, and other varieties as well.  I felt a better balance between personal opinion and actual facts could have benefited this guide, yet part of it’s noteworthiness is its willingness to show both love and a strange kind of hate for aspects of the films, their actors and directors.

Kyle W. Bell’s “The James Bond Guide” is informative in many ways, yet the strong biases and word choice expressing those opinions might find a chill response from lovers of all things with the James Bond brand. Just the same, I feel it’s an absolute  “must read” for fans of the film.

Description: “James Bond is a movie icon. His status as the world’s preeminent spy has been unchallenged for nearly fifty years. The films span several generations. Fans include both young and old, Western and Eastern, male and female, spy aficionados and just casual viewers. While the Cold War has come and gone, this super spy has lived the test of time.

The James Bond series has entertained us with its wit, pulse-pounding action, gorgeous women, exotic locales, sleek cars, and imaginative gadgets. The formula is tested and it works almost every time, partially thanks to the actors that make Bond their own. It’s a franchise that honors its traditions, yet is not afraid to adapt to the times.

The James Bond Movie Guide is the ultimate source for this renowned movie franchise. With a collection of reviews and summarizations for the 22 films, you will learn about each in detail and without fear of spoilers. A list of facts and cast for each film is included, along with series-wide facts, trivia, figures, and charts. Adding to the value are reviews for James Bond video games dating back to GoldenEye, some of the best Bond quotes from each film, as well as a list of the top 10 greatest James Bond theme songs.”