Interview: Michael Drakich, Latest Release “Lest The Dew Rust Them”

From the author: “No awards, no accolades, no writing degrees or diplomas, only a deep rooted love of reading and writing. You can find me at Goodreads.”

Lest The Dew Rust Them is a thriller released on February 23, 2013. Blurb: “Terrorism in America has a new game…decapitations!” 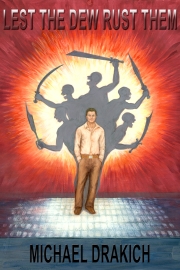 Description: “Homeland Security Director Robert Grimmson faces the task of catching five men in New York City. They call themselves the Sword Masters with a single minded plan of terror through decapitations.

Barely has the task begun when a new arrival at JFK is a man importing thousands of swords! Alexander Suten-Mdjai is a trainer in the deadly art of swordsmanship and Robert cannot help but believe there is a connection between him and the Sword Masters.

As he goes about the task, each step in his search is made more difficult through the interference of politicians, the media and his own government. Robert’s examination constantly draws him back to Alexander who regales him with a tale of swordsmanship from his lineage featuring events of mankind’s bloody past and often oddly having a connection to the case before him.

With the clock ticking as New York collapses into a deep panic, he must catch the Sword Masters before it is too late!”

As a youth, I grew up in the sixties and seventies when science fiction was entering its heyday. Authors like Isaac Isamov, Robert Heinlein and Arthur C. Clarke were filling the market with great reads. Fantasy was also making itself known. Already out there was J. R. Tolkien’s Lord Of The Rings, but a number of new authors, Terry Brooks and Stephen R. Donaldson for example, were making an impact. Needless to say, their works had a profound impact on me and why I chose the genre’s that I did.

When did you first realize you wanted to be a writer?

Strangely enough, it arose out of reading what I considered a horrible novel. I have a habit of visiting the large Chapters/Indigo bookstore at the major mall. They have a Starbuck’s right in-house. My usual modus operandi was to buy a large vanilla almond latte and peruse the mark down shelves for something to read. Often, the book I ended up buying was cheaper than the coffee, but I digress.

Some seven years ago I picked up a novel that was part of a very successful epic fantasy series. It is always my habit to read in its entirety any book I purchase. This one was a task. I found it abysmal. No sooner had I finished the book when what to my surprise, they had made a television serial out of the series. I was flabbergasted.  If what I considered a very bad novel could have such success, then anybody could do it. I sat down at my computer to prove it. On Monday, February 20, 2006, at 5:23:53 PM, I began my writing career.

Over the next ten months I kicked out my first novel. Feeling like a proud papa I showed it to family and friends. The lukewarm reception it received was enough to tell me the truth. It was crap. But in the meantime, what had happened was I had been bitten by the bug. I wanted to be a writer. I dedicated most of my spare time to joining a number of online workshops and honed the craft. The results are the novels I am producing today. I’m proud to say they are being well received and getting glowing reviews.

Do you remember the first novel you read?

Amazingly, the answer is yes. I want to qualify it as not including children’s books such as the wondrous works by Dr. Seuss. I was ten years old and in the school library I chose Moby Dick by Herman Melville as my first reading project. I remember my teacher, Mrs. Bickerton, advising against it as being too difficult for a youth of my age. I set out to prove her wrong.

What excites you about writing?

Without a doubt, it’s the entire creation thing. You start with an idea and over the next several months you expand it into something formidable – a complete novel. If you know Maslow’s Hierarchy of Needs, then you can appreciate how the pinnacle, Self-Actualization, is achieved through writing. It is a most rewarding experience.

Do you have any advice for aspiring writers?

Be prepared for the long haul. Writing is a marathon, not a sprint. Don’t take short cuts. They all end up in dead alleys. Don’t get discouraged. There are many roadblocks you will have to circumvent. I like to think of the character, Captain Peter Quincy Taggart, from the movie Galaxy Quest and his famous quote, “Never give up! Never Surrender!”

How long does it take you to finish a book from start to submission?

I don’t think you can pinpoint a specific amount of time. Different novels are different lengths and I usually only write about fifteen thousand words a month. I still do have a full time job as other than a writer. Using my current release, Lest The Dew Rust Them, as an example, including the editing process, it’s about eight or nine months.

Do you prefer writing series books over non series or does it matter?

There is a trend in speculative fiction for writers to write series. They are all bent on producing the next best trilogy, or quadrology or octology or whateverology they can produce. As a reader, I find it most frustrating to read a novel and discover it’s the first part of a series where the rest of the books have yet to be written or released. I’ve decided to make my novels stand alone. Saying that, my current work in progress, Demon Stones, is set in the same world as The Brotherhood Of Piaxia, but one would not have had to read both. The links between the two are small.

What would you like readers to know about you the writer?

My style. My editor describes me as an easy style. Simply put, it flows. I think one of the most distinctive things about it is my practice of never using dialogue tags. Instead, when necessary, I use actions to identify speakers. It gives the reader a visual as to what is occurring during the dialogue.  Filling up a novel with a number of – he said – she said – is disconcerting to the reader. And don’t even get me going on descriptive dialogue tags! If you are unable to portray the way a character says something without having to use words like mumbled, whispered, screamed, and taunted, or whatever, you need to hone your craft. It disturbs me to see their use becoming more prevalent in writing today. It’s the lazy way out.

When a new book comes out, are you nervous about how readers will react to it?

When I released the first novel, absolutely. I’m only human in looking for acceptance. In the early days of learning the craft of being a writer I suffered my share of indignity from those critting my work. It was, at first, a hard pill to swallow. My apologies for the cliché but I think it is the most appropriate term I can use. Now, I’m no longer so concerned. I have faith in my work as a result of the good acceptance of my earlier novels. With success comes confidence and with confidence comes the strength to write even better.

What kind of research do you do for your books? Do you enjoy the research process?

This is an important issue to me when writing. I have always recognized the order in the title, science fiction. “Science” is the first word. I want my science fiction to have some measure of believability. I am an avid watcher of the science channel, the NASA channel, and the history channels. They are a great source of ideas and information. Programs such as “Through The Wormhole” are filled with mind bending concepts.

Do deadlines help or hinder your muse?

I haven’t really ever found a problem with my muse. Whenever I sit to write I am able to roll out the prose without having to wait for my muse to kick in. As to deadlines, I like to think of an entertaining quote from the author, Douglas Adams. “I love deadlines. I love the whooshing noise they make as they go by.”

Do you tend to base your characters on real people or are they totally from your imagination?

I believe characters are everything. As a writer it is imperative to get the reader to emote with your characters. Failure to get this connection is certain doom for your novel. They must love them, hate them, and want to be them. Understanding this concept is what drives how a character is portrayed. I visualize how I want the character to be perceived then drive the makeup of that character in the direction needed. I would be lying in saying that is the be all and end all of their makeup. In some, I insert certain attitudes to resemble my own. Call it a weakness.

Is it hard coming up with names for your characters?

Normally, no, but in Lest The Dew Rust Them, it was a challenge. The diversity of the cultural backgrounds required a lot of research in selecting names. All I can say is “Thank God” for Google.

Which of your stories would make a great movie?  Who’d play the lead roles?

I believe they all would. I have even had reviewers comment so. Rather than address all three I would like to keep my focus on the new release, Lest The Dew Rust Them. The three central characters are Homeland Security Director Robert Grimmson to be played by Tom Hanks, lead terrorist David Crombie by Leonardo DiCaprio and enigmatic sword trainer played by Johnny Depp.

Is there a character from one of your books that resonates deeply with you?

Not a character, but a name. Early in my writing career I wrote a short story entitled, The Intrepid Explorer. The main character was named Bartholomew Higginbottom. Since then I have reinvented this character in a number of ways to appear in my novels – sometimes as a cameo, sometimes a major character. Each reincarnation is unique. It’s just a little quirk of mine.

Other works by the author: 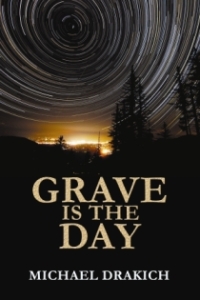 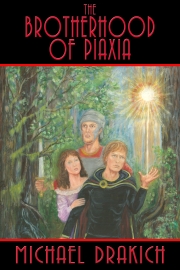