Reviews Upcoming This Week & The Rest of July

Just a quick update on reviews that will be posted this week, and then others throughout the month of July. Also, for those writers who’ve submitted a request within the last days (a week or so), I’ll be sending out responses also within this timeframe.

For those seeking a review, don’t forget to put “review request” within the subject as this automatically filters your email into a special folder, and take a little time to read our guidelines to see if your work will be appropriate for this site. I’ve updated a couple of issues that developed regarding religious based material, whether it’s fiction or non-fiction. My comments on the topic can be read on a review post here on the site. If you’ll see, the reason why I don’t accept it isn’t because I don’t necessarily find it of interest.

A Kiss Before You Leave Me by James Hulbert

She’s My Dad by Iolanthe Woulff

In the next two weeks:

The Red Gate by Richard Sutton

That Which is Human by Bruce C. Davis

Filed under Reviews, Writers and Writing

Through 31 July 2011, my titles “The Angel of Berlin” and “Katrdeshtr’s Redemption, The Night Cat Book1” will be 50% off their cover price to help celebrate Smashwords annual Summer/Winter Sale. So if you’ve been thinking about buying, here’s a great opportunity to get a special deal!

But even if you’re interested in other works, head on over to Smashwords, as you’ll find literally thousands of books 25%, 50&, 75% off or even FREE to suit your individual tastes, until the end of July. If you’re a Smasher, and hadn’t read the site updates, you too can participate in this promotional offer. Help support the Indie Revolution!

Katrdeshtr’s Redemption, The Night Cat Book One. Description: “Ancient, brutal beauty, Katrdeshtr the Night Cat, Russian vampire and incorrigible mischief maker turns to old pleasures to relieve his eternal boredom, yet when his sometimes partner finds a new love, satisfaction takes on new meaning. This change of events can only end in someone’s eternal death and Kat doesn’t intend for it to be him!”

“…these long-lived, almost immortal, vampires have had to come to terms with so much through the centuries and I think this is probably one of the greatest strengths of Red Haircrow’s Katrdeshtr’s Redemption.” —Top2Bottom Reviews

“Written in vivid detail and elegant prose, the author has created rich characters with emotional depth, and provided a glimpse into the heart, soul, history, and people of Russia.” —Outlaw Reviews

“The best vampire stories always have an element of the exotic to them, but it’s rare that an author is able to saturate the story so thoroughly.” —Queer Magazine Online

“Red Haircrow embraces the nature of the vampire, adds in a Russian setting, and then wraps it all up in a narrative that is exotic enough to capture your attention, but which flows so well you never feel interrupted.”—Bibrary Bookslut

The Angel of Berlin. Released 23 May 2011…Description: “When Robin, a young university student, saves the life of a beautiful youth, he finds he’s made a devoted friend. But without memory and voice, the newly named Angel is a mystery, occasionally exasperating with his child-like qualities yet with touches of darkness which makes Robin wonder what kind of being he’s really taken in.A speculative fantasy of magical realism and innocent love set in modern Berlin.”

“No matter what he’s writing about, Red has an absolutely gorgeous style to his writing, with a narrative voice that is almost hypnotic.

This is a story that began with a dream, and that dreamlike quality comes through in the story. Red draws us into his dream with beautifully seductive language, painting a picture in our minds that is, at the same time, both vivid and subtle.” —Bibrary Bookslut

“There is no doubt Red Haircrow has a gift for descriptive prose; the vivid imagery the author presents through the selection of language sketches a picture for the reader that is rich in feeling and atmosphere. It is, in its way, quite poetic, and in the case of The Angel of Berlin lends to the dream-like quality of this lovely fantasy.” –Top2Bottom Reviews

And for a sneak-peak excerpt of my current work in progress, Hazardous Confessions, please visit my GLBT Bookshelf pages, The Journey of Red Haircrow.

Description: Starting a new life wasn’t turning out as easy as he’d hoped even though Andi Schaeffer is returning to his family’s ancestral home in Germany. After a failed affair and very public break-up with his former lover in America, life in the small picturesque town of Bad Alder is just what the former police officer is looking for: quiet anonymity and a place to regain his inner balance and calm.

But like the wide waters of Schartig Lake seen through the rear windows of the stately house, beneath the village’s calm surface lies a secret someone is willing to kill to keep hidden. Though he no longer has a badge, with the help of the quietly charismatic local polizist, Gerald Dahlke, Andi sets out to unravel the mystery and motive of murder.

DBoyz of Dogwood by C.B. Smith

Review: This is the second book I’ve read by author C.B. Smith who seems to focus on young adult novels.

It’s a fast-paced story centered around Kyrie, a skater girl wanting to get in with one of the best teams around, the DBoyz of Dogwood. From mental conversations ranging from sexploration with her skater boyfriend, to whether its possible to “hook up” with an older pro, or finding her “bio-dad”, we are inside Kyrie’s head, with her likes and dislikes, things that gross her out and others she doesn’t understand like her mom Monique’s unique personality and way of being. The whole tale moves up to a climax that touches your heart, as it’s a situation almost anyone can empathize with.

The story has all the skate terms, slangs, euphemisms and references to ring true with those who are “in the know” about such stuff, but there is so much of it seemed like overkill to me. It took attention away from the central plot and character development for me, but it depends on what you looking for out of a book.

Overall, I really liked this book. It’s got great messages for young people, some serious things to think about, and certainly events that would try even an adult’s emotional maturity, plus it’s fun. I’d definitely recommend this book to both teens and adults.

Description: The only thing standing between Kyrie Elias and her skateboarding dreams is one hard-headed skater who seems to take great joy in breaking her stride. But when you go up against a girl who has the desire, the will, and mad skater skills to boot, you ve got a whole world of hurt on urethane wheels ripping for you at full throttle!

C.B. Smith is a full time writer. He spends his days chasing words around the page to capture just the right ones for his latest work. Website: http://www.freewebs.com/authorcbsmith/
*
Per the author, 13 July 2011, regarding this title:

D-Boyz of Dogwood has morphed to Krazy Dreamz and was rereleased on 30 June 2011. This title can be found at Smashwords and http://www.freewebs.com/authorcbsmith/    Readers wishing to contact me can do so by emailing: cbsmith3000@yahoo.com 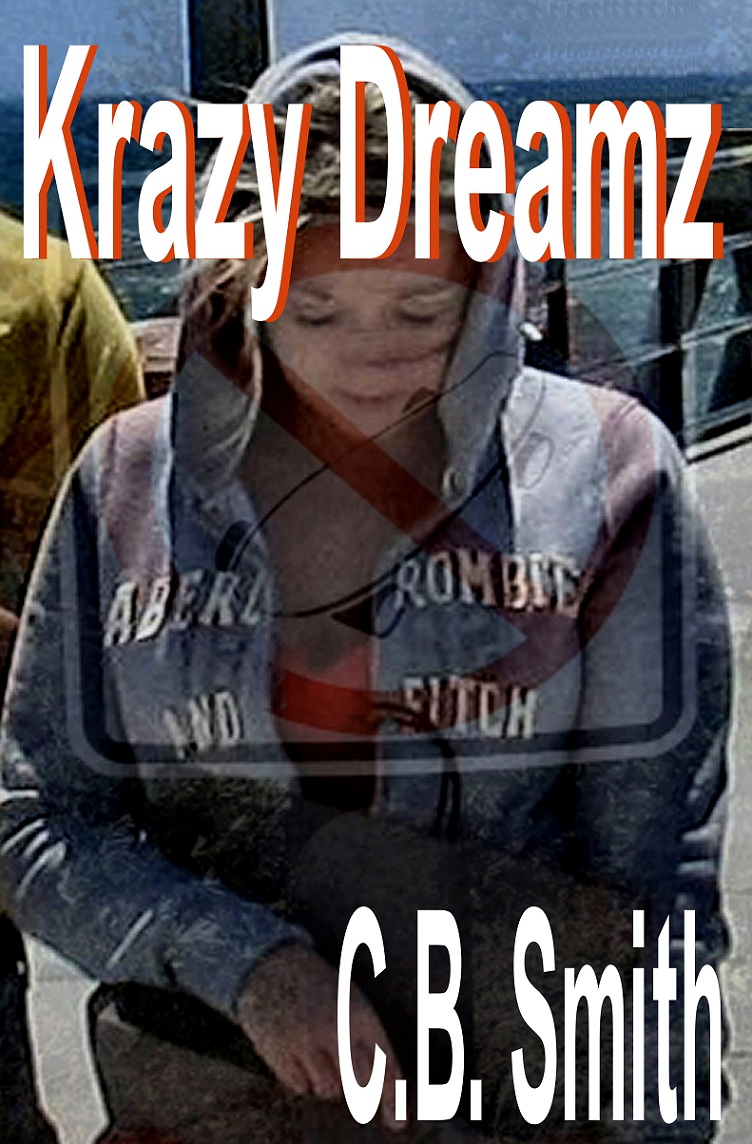 Review: The story of “Globe Hurler” is engaging, and the settings and landscapes are very imaginative and realized as the author presented a strong vision of their world creation, Hadanum. It’s fairly fast moving, action packed and detailed as we follow Balon, a young watchware searching for his exiled father sensing that the self-serving and overbearing judgements of the hierarchs wrongly sent him and others away to their likely deaths.

The hierarchs supposedly guard the tribe of Jana people by regulating all aspects of their lives including marriage and procreation, but they have a secret they are struggling to contain, which if revealed, will tear the fabric of their society apart and end their rule. Balon and his friends are the very ones trying to find out what mystery their leaders are hiding so the people can be free to love, live and survive as they can.

I did have some issues with the characterization, as I always like to find someone I can really believe in and root for. Sometimes I felt that for Balon, but other times his errors and outbursts, like his friends, were so exasperating, I felt they deserved the punishment they received. The characters felt more like some modern day young adults in their aims and occasionally petulant behaviors than survivors who’d grown up on a harsh planet and should have instinctively developed certain skills of survival, both social and environment.

Overall, I thought Globe Hurler was a good sci-fi/fantasy read, as it combines elements of both, though I thought the prologue and epilogue could simply have been included in the main narrative for they were part of the story anyway. It ended in such a way, by giving the reason for the title later in the book and introducing a certain character, suggesting it might have a sequel, which I would be quite interested to read, if so. Quite ambitious in a good way, Globe Hurler is a worthy read.

Description: On the savage planet of Hadanum, the last reengineered remnants of humanity struggle for survival. Thallsen, home to the Jana, is surrounded by massive megas, organisms that cover the land and sea, hosts to smaller, but no less terrible creatures.

The Jana have relied on ancient machines from Dead Earth to protect themselves for generations, but their dependence is about to be tested. In search of his father, Watchware Balon has instead found something that will send the Jana hurtling into a conflict for which they are not prepared. On a journey that takes him far from the security of home, he will discover that his people can and must find the strength within themselves to throw off the shackles of their past, or be wiped out forever.

and in print at Blurb.com.

Current Giveaways For a Variety of Indie Authors

Through the Indie Book Collective Group on Goodreads.com, here are some current giveaways from indie authors in a number of different genres, everything from family friendly fiction to speculative fantasy to romance. It’s a great way to meet and introduce yourself to writers and writing you might not otherwise have found. You’re looking for us, we’re looking for you 🙂

Filed under Contest/Giveaway, Writers and Writing