“A Bloodstained Hammer” -A Criminal Thriller With A Unique ESL Benefit 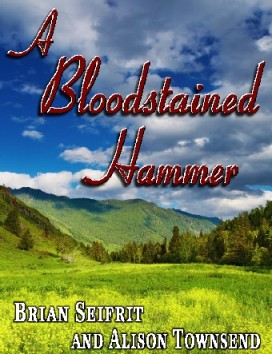 Written by Alison Townsend MacNicol of 100 Mile House, British Columbia and Brian T. Seifrit of Fruitvale, British Columbia, the story is a fictionalized account of a true crime that occurred near Fruitvale in 1959. It explains work on a farm in the Kootenay District of British Columbia and describes the family life of the hog farmer, Kent Townsend, with his wife and three children. The farm does not provide enough revenue to support the family and the farmer has a regular job at a smelter in Trail B.C., about 15 miles from the farm.

In order to expand the operation and have help on the farm, Kent hires a 27-year-old laborer with experience on Alberta ranches. The hired hand, Alex Hudulak, is unpolished and not highly educated but seems to be a willing worker. He helps in the harvesting of the hogs, makes maintenance repairs on the farm and manages the increased number of hogs that Kent acquires for the next year.

The first half of the story relates to the routine life on the farm.

In the summer of 1959, the hired hand gets drunk and for many psychological reasons as outlined in the story, in a fit of rage, rapes and kills the farmer’s wife and daughter. He flees the scene but is captured very quickly. The rest of the story describes the impact that the crimes had on the farmer and his family and laments the seeming injustice in the case.

Although set over 50 years ago, the story has relevance today as the Federal Government tries to aid or compensate the families of victims of serious crimes. The use of the insanity defense in murder trials and the way in which murderers are rehabilitated in remarkably short order today provide a backdrop to the similar situation in the 1960’s.

The text is supported by free lesson plans that can be used by teachers and students who use the book as a means to teach and learn English. Due to the graphic nature of the crime and the sexual thoughts and actions of the hired hand, the story is more suited to Secondary School students and adults rather than middle school students. The vocabulary is easily understood by anyone with grade 7 reading skills and the lesson plans include questions and answers that explore and explain the meaning of the more difficult words.

Information about the Authors

Alison Townsend MacNicol is a daughter of the union of the hog farmer and his second wife. Alison works at a full-time job as Manager of a retail operation, is a housewife and mother and somehow finds the time to write intriguing stories.

Brian T. Seifrit is an accomplished author with six books previously published. He is a childhood friend of Alison’s who has helped her write this story, doing research on court documents and writing some chapters.

Brian hopes that the book brings attention to the fact that some killers get away with homicide using a faked insanity plea. The killings destroyed the faith and trust that the victims’ family had in the Canadian Justice system and terribly affected the lives of all surviving family members. He hopes that the book raises questions about the insanity defense and encourages more effective prosecution of capital trials. As opposed to being put into a federal prison for the act and atrocities he committed, the murderer spent several years as a worker in a benign hospital farm environment. The Townsend family suffered from the effect of the ordeal for the rest of their lives.

Information about the Publisher

Your ESL Story Publishers Ltd. is based at 11 Scott Island, Newboro Lake in Ontario. The company’s objective is to publish texts, novels and training materials for the booming English as a Second language (ESL) market. The publisher, William Jenkins, did a major part of the editing of “A Bloodstained Hammer”. The company has a website at https://yourstorypublishers.ca where copies of published books, computer software and free lesson plans can be ordered.

A reviewer may obtain a copy of the book in PDF format. Contact Publisher@yourstorypublishers.ca.

The book can be purchased through the store at https://yourstorypublishers.ca. Copies of the free Lesson Plans can be downloaded there as well.

The book is also available as an eBook through Smashwords who distributes to all major retailers.

The paperback version is priced at $15.99 and the eBook version is $5.99. The lesson plans are free.