Pleased to announce our film has been officially selected to screen at the Balkan Can Kino & Film Festival in Athens, Greece. The event takes place between 4-12 October, 2019. More details about the event and group from their website:

“Balkan Can Kino is a collectively run cinema, lab & film festival, founded by film professionals in 2017 in Athens and hosted on the ground floor of Communitism. Film programming focuses on alternative approaches to cinema and audiovisual art in order to showcase diversity. At the same time, it offers film education with the organization of workshops, discussions and lectures, at low cost or completely free of charge.

Our dream is to create a solidarity network among filmmakers, organizations and institutions, active at local and international level. The project is open to those who are interested in getting to know us and/or participate.”

Also in October, for an event on…

While I 100% support Native peoples telling their own history, instead of yet another non-Native giving their European perspective on Indigenous people, here’s an interview featuring myself and others on topics of racism, stereotyping and the Eurocentricism behind the Indian Citizenship Act. What are the lessons applicable right now, as the genocide and erasure of Native peoples is on-going, to the detriment of all.

This nation was founded on a genocid, before genocide was invented.Lawrence O’Donnell (Journalist MSNBC) 2016

Tune in June 2nd to Our Interview on #WDR #Zeitzeichen’s Broadcast: “The Indian Citizenship Act” 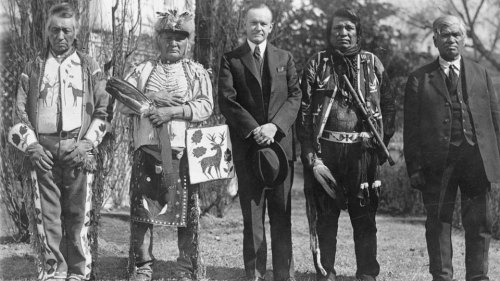 Tune in June 2nd, for Red Haircrow’s interview by Claudia Friedrich, part of the WDR Zeitzeichen broadcast on “The Indian Citizenship Act”. Make a note to listen in on topics of racism, white supremacist ideology and tokenism, all of which involves Germany’s problematic treatment of Native peoples and cultures today. All intersecting with and part of the rise of normalization of racism and nationalism BIPOC, German and foreign alike, are faced with daily…and which harms everyone. It continues systems of inequality, injustice and oppression.

Photo from the WDR webpage.

We had a nice crowd in Osnabrück for “Forget Winnetou! Loving in the Wrong Way” screening and Q&A. Thanks to everyone who came out, we hope it was a positive learning experience in conjunction with the on-going exhibition on the legacy of Karl May at Felix Nussbaum Haus.

“Can you #copyright #culture?” Article & Video from dBs Studios #Berlin

From the event March 13, in the on-going series of discussions, dBs Dialogues in Berlin, at the dBs Film & Music School. Can you copyright culture?  5 Things We learned: